Justin Herbert from Oregon is anticipated to be one of the top quarterbacks taken in the 2020 NFL Draft this year in Las Vegas, Nevada. The Ducks signal-caller had an impressive final college season, guiding the Ducks to a 12-2 record and a win in the Rose Bowl over Wisconsin. He threw for 3,471 yards, 32 touchdowns, 6 interceptions with a 66.8% passing percentage. 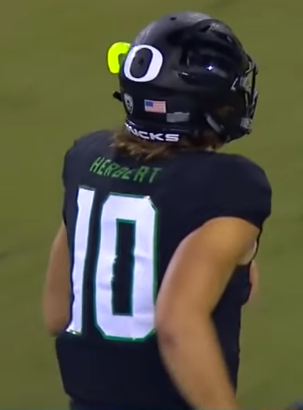 It was reported that Justin Herbert scored a 25 on the Wonderlic test during the NFL combine, tying with fellow prospect Brian Lewerke. This Wonderlic score also put him well ahead of Tua Tagovailoa’s Wonderlic Score of 19.

In 2018, Herbert threw for 3,151 yards, 29 touchdowns, giving up 8 interceptions. His passing completion percentage was 59.4% in quarterbacking the Ducks to a 9-4 record. The 6’6″ 237 lb. Herbert is being mentioned in the same draft prospect conversations as Tua Tagovailoa and Joe Burrow as possibly being one of the highest picks of the 2020 class. Herbert is from Eugene, Oregon and graduated from Sheldon High School. Due to an injury in high school in his junior year, Herbert had very few Division One offers.