Tua Tagovailoa is widely expected to be one of the highest-drafted quarterbacks in this year’s 2020 NFL Draft class. Tagovailoa had an impressive season with the Alabama Crimson Tide, even though their season was unsuccessful by Alabama standards, likely due to his injuries. In 9 games, the junior quarterback threw for 2,840 yards with a 71% completion percentage. He tossed 33 touchdowns while only throwing for 3 interceptions. 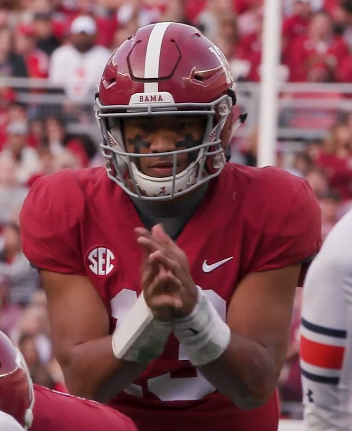 Tagovailoa reportedly scored a 13 on the Wonderlic test prior to the NFL Combine and then took it again and recorded a 19. This is still the lowest score among the top quarterback prospects in the draft, trailing the likes of Joe Burrow, Jake Fromm, Jordan Love, and Justin Herbert.

In 2018 with a full season with the Tide, Tagovailoa threw for 3,966 yards, sporting a 69% passing completion rate, with 43 touchdowns and 6 interceptions. He set the NCAA record at the time for quarterback rating for a season at 198.9. Tagovailoa led the Tide to the College Football Playoff National Championship before losing to Clemson. He is perhaps best remembered for the 2017 College Football Playoff National Championship when he replaced Jalen Hurts as a freshman and scored a game-winning 41-yard pass in overtime to DeVonta Smith.