Which President Has the Highest IQ?

Have you ever thought about how smart one would have to be to be the United States president? To run an entire country and make decisions that would impact everyone’s lives? Shouldn’t there be some sort of test to get into that position? Strangely enough, no, but there is a test where a person’s brilliance and capability to reason can be calculated.

Now, because of the development of science over the last 245 years or so (and the fact the IQ test wasn’t invented until 1904, not every President was individually tested via the IQ test when they were alive.

Luckily, Dean Simonton, a researcher and psychologist from UC Davis estimated our US Presidents’ IQ levels based on factors such as brilliance, intellect, and openness. Because of this, we find ourselves with a solid picture of our smartest (and maybe our not-so-smart presidents).

So with that, here are the top 10 smartest presidents based on IQ!

With an estimated IQ of 152.3, James Garfield proudly wears the badge as the tenth smartest president in US history.

Notably, James Garfield was a military man and successfully led a brigade at Middle Creek, Kentucky, against Confederate troops in 1862. He was later appointed brigadier general in the Union army.

His term was short (he was assassinated after only 200 days) but in that time, he battled corruption within the government and attempted to fix a Congress left in tatters after the Reconstruction Era. It’s no mystery he held such a high IQ score.

The 26th President of the United States (and the youngest president too) was also quite the smart cookie! His IQ ranked at 153. It’s no surprise, as he attended both Harvard Law School and Columbia.He is often called the “Father of the U.S. Navy” and won a Nobel Peace Prize to boot.

During his time in office, he (in his words) “…did not usurp power, but [he] did greatly broaden the use of executive power.” Foreign relations were firmly established in his time and, oh, the Teddy Bear earned its name from the young president’s refusal to shoot a black bear that his dogs had attacked on a hunting expedition.

First vice president under George Washington, John Adams became our second president in 1797. He had an IQ of 155, and it’s no surprise. He was a Harvard educated lawyer and was already associated with independence as he was a delegate to the First and Second Continental Congresses.

He served in France and Holland during the Revolutionary War as a diplomat, frantically attempting to negotiate a treaty of peace. He clearly had a love for his country and gladly took the presidential position after two terms of vice presidency.

In a letter to his wife he wrote “Before I end my letter, I pray Heaven to bestow the best of Blessings on this House and all that shall hereafter inhabit it. May none but honest and wise Men ever rule under this roof.” And wise they were!

A historically impressive, larger-than-life figure, Woodrow Wilson had an IQ of 155.2 and helped lead the country through the bloodshed of the First World War and founded the League of Nations (which was the start of international relations in the modern sense).

His brains likely cultivated during his time at Princeton, the University of Virginia, and Johns Hopkins. He was a professor before his time as president, proving that a firm, educated, and capable president was what it took to lead the country and, through one of the bleakest eras in American history, Woodrow Wilson held firm.

Perhaps not one of the more memorable presidents, Jimmy Carter served a term as US president starting in 1977 and held an IQ of 156.8. Though the era he served in wasn’t quite excitable, Jimmy (or James) Carter advocated for democracy, human rights, and worked to promote economic growth. He was also an important diplomat in working to smooth over the United States’ relations abroad, and for these achievements he received the Nobel Peace Prize in 2002.

After his presidency, he became a professor at Emory and received the Presidential Medal of Freedom. 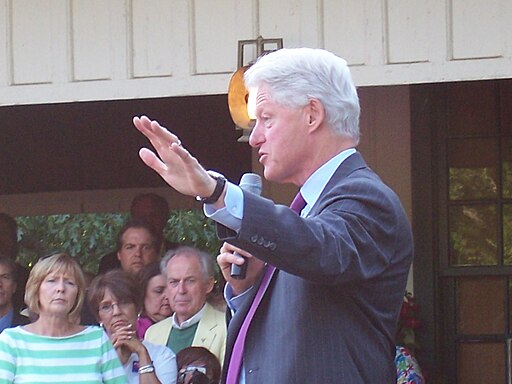 A president of the contemporary era, Bill Clinton (serving from 1993-2001) had an IQ (estimated) of 159. Without a war to engage in or an economic crisis to balance, Bill Clinton still did wonders for the American economy, boasting the lowest unemployment rates of modern times, the lowest inflation in 30 years, and high home-ownership rates.

He was the second Democratic president (after Franklin D Roosevelt) to be elected two terms. Unfortunately, he was impeached in his second term due to his affair with with then-White House intern Monica Lewinsky. Clearly, his IQ wasn’t quite enough in that situation.

A Harvard man, Purple Heart veteran, and Pulitzer prize winner, John F. Kennedy is our fourth smartest president with an IQ of 159.8.

He valiantly served the country in a time of national unrest, with the Civil Rights Movement in full swing, the Cuban Missile Crisis, and the Bay of Pigs. He handled each situation with swift intention, passing the Civil Rights Act of 1964 and preventing a potential third World War.

Our second youngest president was unfortunately our youngest to die, as he was assassinated only just past his first thousand days in office.

James Madison’s estimated IQ of 160 stands head and shoulders over all but two presidents (even if he did not at only 5 foot 4 inches).

Before even reaching office, James Madison helped firmly establish the United States as a country, assisting in ratifying the Constitution by authoring the Federalist Papers as well as drafting the Bill of Rights and attending the Constitutional Convention frequently. Because of this, our third smartest president earned the title “Father of the Constitution.”

Thomas Jefferson comes head to head with James Madison with an estimated IQ of 160 as well. Another significant founder of the country, Thomas Jefferson both wrote the Declaration of Independence which ultimately birthed the United States of America, as well as initiated the Louisiana Purchase which doubled the size of the fledgling country in 1803.

The man with an arguably gifted mind wrote “I have sworn upon the altar of God eternal hostility against every form of tyranny over the mind of man.” And with this moral compass in hand, Thomas Jefferson helped firmly establish the country we enjoy today.

John Quincy Adams! (Yes, it’s not the same John Adams from before)

With an estimated IQ of 175, John Quincy Adams is hands down the smartest president the country has ever had. Of course, he was a Harvard graduate and a lawyer. He ended up serving on both the Senate and the House of Representatives and he also happened to be the first United States president to be the son of a president.

“Old Man Eloquent” (as he was called based on his superb skills as a public speaker) helped negotiate the end of the War of 1812 and also shaped the Monroe Doctrine, which helped maintain US independence by stating any sort of European colonization efforts in the Western Hemisphere would be considered a threat and, furthermore, the US would not interfere in the affairs of Europe.

Perhaps there isn’t a competency test to become President of the country, but it’s clear our greatest leaders were of high intellect and, moving forward, we should expect men and women of equally keen intellect to carry our country forward.